Once again, Tumblr robbed me of my sleep as I continued to scroll through countless hipster photographs and trendy smartphone wallpapers. Just before my mind could drift off into slumber, I was intrigued by one specific post that found its way to my phone screen.

“insomniac. I’m convinced that heartache is a form of insomnia.”

It was only a few words of poetry that managed to snag my attention. As I continued to look through the related posts, I noticed were all signed with the unfamiliar name, R.H. Sin.

I continued to scroll down the page.

“emotional CPR. We try our hardest to force life into things that must die and that’s what hurts the most.”

“mistakes. My greatest mistake was believing you when you claimed to have missed me.”

I felt my passion for writing intensify after each poem I read. I’ve never felt such an instant connection to any piece of writing especially from a single author. It was almost chilling how relatable the poems were. I felt like I was reading my inner thoughts; the same thoughts I promised myself I would never tell a soul. Yet, there I was reading them off a platform available for millions to view at a time.

R.H. is the abbreviation for Reuben Holmes. According to The New Yorker, the name Sin is a Mesopotamian reference to the moon, and Holmes prefers writing during the late-night hours. His pseudonym is just as poetic as the content he writes. The Instagram poet has one million social media followers worldwide. He writes and publishes for women empowerment.

Sin has become such an inspiration to women that he created a tag he uses on Instagram called, “my words on skin.” He uses this caption when he reposts pictures that are sent to him from women with his poems tattooed on their bodies. He genuinely aspires to be the support and strength that women deserve.

Interestingly enough, Sin only follows one person on his Instagram account. His wife. Various captions on his Instagram posts say he does not need to be invested in the lives of others. However, even I questioned how he gets inspiration for his books if he closes himself off from the influence of social media. After dissecting his Instagram account, I found where the authenticity of his work comes from. Some of his posts consist of two words that simply say, “vent below” and thousands of women leave comments relating to their own struggles in their personal lives. With so many real-life stories willingly offered to him, maybe he really doesn’t need an extensive list of social media followers.

Although Sin may have a lot of support, there are also women who are just as unimpressed by the amount of recognition his work receives. An article from Thought Catalog, written by Trista Mateer, questioned why The New Yorker raved about Sin on International Women’s Day. Mateer sees Sin as a man who accepts praise for things that should be considered common knowledge. She specifically stated that “male-centric feminism is just patriarchy calling themselves good men for not hating women.” I understand Mateer’s concern, but I personally don’t believe Sin has the intention to seek unnecessary praise.

His poetry is his own way of showing his support, and at the very least, it’s an attempt I will accept.

R.H. Sin’s website opens with a few words to his readers; “I just wanted the opportunity to speak to women who are like the ones I’ve met throughout life. All fighting something. My art, my poetry is my way of giving back to all the women who have either inspired me or helped me become a better man.” His poetry is in full support of today’s feminism movement. I believe he has more media attention because he is a man writing on behalf of women. 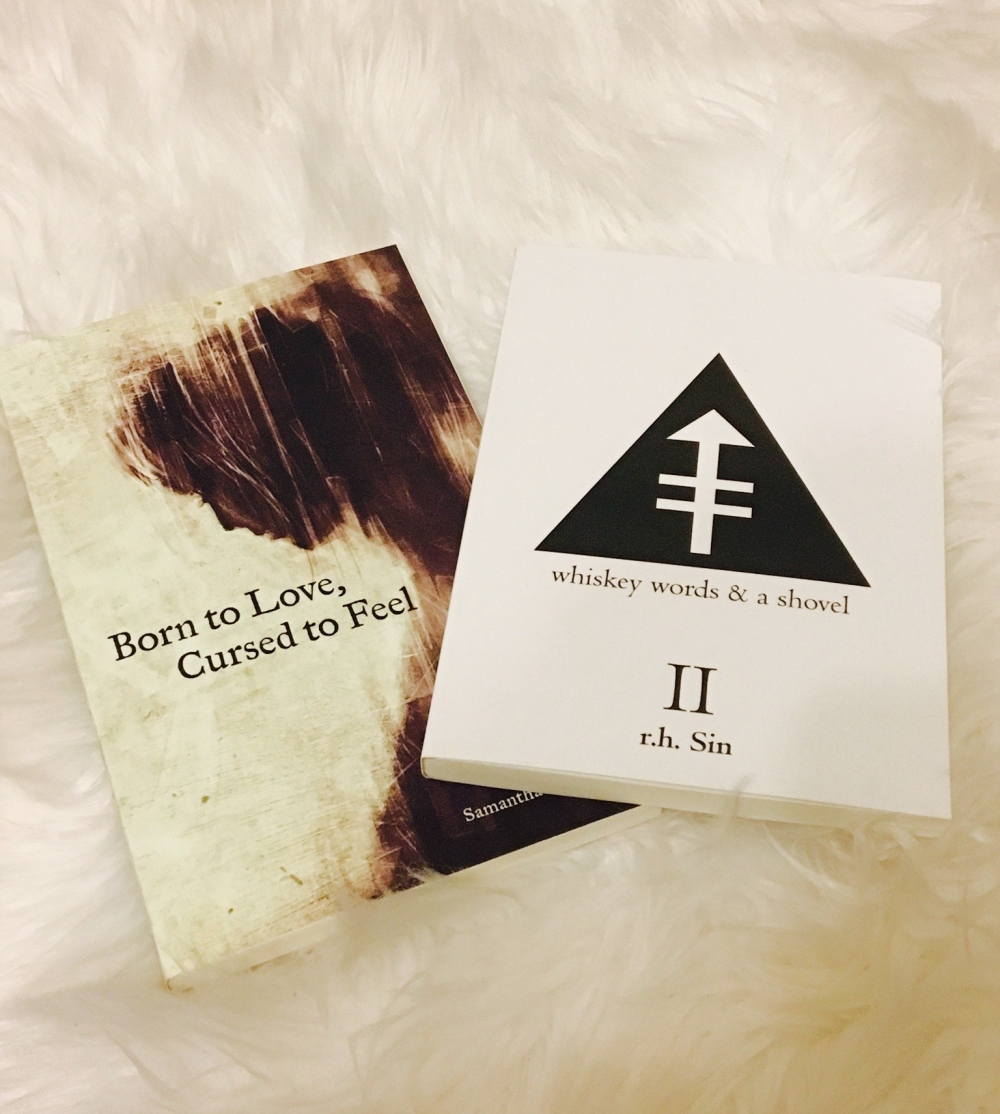 Sin’s first book, Whisky Words and a Shovel, was published in 2015. Since then he has published 8 additional books (“Rest in the Mourning,” “Whiskey Words and a Shovel Part II,” “Whiskey Words and a Shovel Part III,” “I Hope This Reaches Her in Time,” “Algedonic,” “A Beautiful Composition of Broken,” “Planting Gardens in Graves,” “She Felt Like Feeling Nothing”) and continues to rank as a New York Best-Selling author. Sin is currently working on part two and part three of “Planting Gardens in Graves.” These books are set to be released in June and December of 2018.

Sin’s work is published by Andrews McMeel Publishing. Rupi Kaur is another #1 New York Times Best-Selling author famously known for her book, “Milk and Honey.” Samantha King wrote “Born to Love Cursed to Feel” and Amanda Lovelace is the author of “The Princess Saves Herself in this One.” I’ve also collected books from these authors because of the similar poetic style they share with Sin.

I have always been truly fascinated with the art of poetry and the ability for a poet to summarize the most complex and unexplainable emotions. Sin’s poems are no more than a few lines all summarized with a creative title. One of my favorite poems by Sin is, “3:33 p.m. They only treat you how they feel about themselves.” I believe his poetry shines light on the beauty of the simplicity in writing. The few words from each of his poems carry so much meaning and can be interpreted differently by anyone who reads them.

The use of three and four-syllable words disarranged in textbook format does not define intellectual writing, and I believe Sin’s writing proves that. His poetry connects to the human experience and the emotions people in today’s society run so far from. The ability to harness the attention of the masses with only a few words and a fresh perspective is its own type of intellect, and should be recognized more in this post-modern culture.